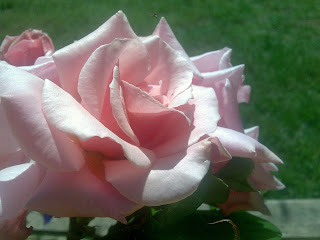 The scent of lilies is particularly intense this year. It might have something to do with the fact that there are three bunches of them dotted around our small cabin.
This time of year.
It's the month of lilies and roses
The month of my Lily Rose.


The fragrance is strong and sweet and lingering. As if it doesn't want to let us go, or let us forget. Maybe we don't want to let go. I bury my nose in the open lily blossom and inhale and inhale. It's the scent of the first few days without Lily when swathes of lilies descended on our home, when baskets of rose petals were collected by her friends to surround her coffin.
It's the scent of loss and love and strange sweet mourning. It reminds me of the days when Lily was still recent. When I could still say, 'Last Tuesday I took Lily to the dentist' or, 'Lily and I made beads last weekend' even though I knew she never would again.
Pots of lilies, bunches of lilies, cards decorated with lilies, we were submerged in their scent, their cool sweet petals which withered and dropped one by one as the days went by.

And this morning was the sickening smell of rotting flesh in Tansy and Leo's room. A dead mouse festering under the bed. I am generally the corpse remover, with a torch, a trowel and a long stick to manoeuvre the bloated body, fat and pulsating with maggots. The mouse tumbled into a makeshift and careless grave in the wood while I tried not to breathe.
It's hard for a bereaved mother to have to dwell on these realities of ravaged and rotting flesh. I try not to, I try not to connect the two, but my mind is pulled back to it, the little black demon at the corner of my brain clawing at me with his piercing talons,
'where's your daughter now? what happened to her?
It's easy to forget that everything will be like that, every lily petal, every mouse, every beech tree, every chicken, everyone you've met today. You. We are protected, shielded and disconnected from the physical reality of death and  its hard when you come face to face with the physicality of our corporal mortality. It's just flesh I guess, there's more to us than that..our bodies are the transitory container for our souls, it's just hard to remember, when all we think about is material stuff.

After the mouse, I emptied all the flower vases. One was a cottage garden bouquet from my mother, long past its best except for a beautiful full blown pink rose with a delicate scent. Discarding the decaying flowers, I gently lifted the rose out, intending to put it in a little pot next to Lily's photo on the table. But as I rescued it, its petals tumbled off softly, like falling snow. I was left with a dried stalk in my hand. It was such a stark image that I gasped, but even as the tears sprung to my eyes I spotted what I had missed before, a perfect unopened rose bud still hidden in the old bunch...a promise of new beauty just waiting to begin its fleeting life.

No loss is ever without its gift . 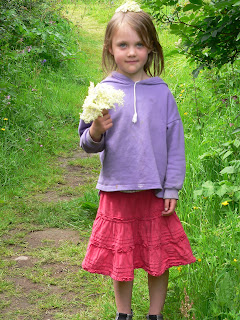 Not what I'd planned

This post is not what I'd planned. The last two weeks were not what I'd planned.
I started writing a post a week and a half ago...a poignant prelude to the date in June which creeps up insidiously every year. The 11th. My daughter Lily's anniversary.
The post is still half written in draft and I just tried to finish it but can't. Maybe I will finish it.
But not yet.
In June I try to give myself some space. To think, to write, to remember, to feel, to connect, to plan a quiet meaningful day for the family.
But then Tansy started being sick.
And then sick some more, and more, and more for day after day every time she sat up or moved.
My three boys left on an annual men's camp on Dartmoor...in the rain, thinking she had a bad bug.
I was feeding her teaspoons of home made raw goat milk yoghurt, slippery elm gruel with banana, chamomile tea, an electrolyte mix of salt and honey.....
It was just me and Tansy in our cabin, in the rain.
I don't usually go to the doctors, I will, if needed, but I love to treat my kids with herbs, healing foods, rest, massage, hot teas and sofas by the fire...it usually does the trick.
She was sleeping more and more and so thin.

I carried her to the doctors in my arms in torrential rain. She was sick.
We were referred immediately to hospital for tests.
I carried her in my arms across the hospital car park in the pouring rain. She was sick.
We were there a week.
Level 12, the children's ward in a side room. High above the city in a little white room far from our woods, far from herbs and healing foods.
Five terrifying hours waiting to go for a brain scan.And get the results.
She lay flat in the bed barely moving or speaking and I carried her to the toilet twice a day and she was sick.
In those five hours I wondered what was going on with my daughters. I cried, I crocheted furiously, I looked across the grey rooftops of the vast hospital complex and wondered why, on Lily's anniversary I was in the same hospital I came to in an air ambulance three years ago. Would I lose another daughter? Why was I not being allowed to have my girls? My mind created all the horror it possibly could and stirred it into an evil brew of fear, terror and sorrow.
The consultant caught me in the corridor.
The scan was clear.
She has a non permanent neurological condition which makes her lose her balance and coordination and vomit when she is upright. It gets better.. quite slowly.
And she did start slowly, to get better. She started to smile. And talk...quite slowly and deliberately as if she was tasting the words for the first time in her mouth . She smiled more, to compensate for lack of words..lovely melting smiles when she wanted another oatcake..or some purple bedsocks from the hospital shop. And she was so hungry...even for hospital food. Really.
We learned that she could eat sucessfully if she lay down and didn't move for an hour afterwards. Then she started to sit up without keeling over.....
And then she stood up, shakily...

And so it goes..we are now home and things are the same and things are different. She is walking like a gigantic toddler, falling without warning, dashing towards me in a little rush to reach my arms before she topples. I have to watch her. All the time.
Everyone is adjusting to mum being around again..I'm not often away... but in some ways it's been a gift.
Apart from the terror of those days when she was really ill and I imagined the worst, I found that I could do nothing for a change. I couldn't go far....a run up and down the hospital stairs two or three times a day to buy a newspaper or some fruit, and then more sitting in the little white room. I looked out of the window, I crocheted, I read, and as Tansy started to improve we just hung out together. We don't ever get to do this. Just us two. I noticed things about her I hadn't noticed before. We laughed at how you can tell who was approaching by their shoes....doctors clip clop and nurses trudge in soft soled shoes. We commiserated at the hourly checks on her drip all through the night. It wasn't all bad.

And as always it was love that kept us going....messages from friends..little cards, offers of food, kindly nurses, other parents on the ward. It is very easy, even after what happened to our family three years ago, to become wrapped up in the material rush and grab of our lives, to forget, to think that all our little daily worries are important.
Again we've been set back on our heels and shown another way forward. Time to reflect, time to face fear and loss in the face and see their sharp teeth, time to slide between the teeth and find the connection to others. Time to feel the love of neighbours, friends and family. The time to support a mother weeping because her daughter was moaning in pain after surgery, time to share stories with another bereaved parent over coffee in the ward kitchen.
That's what I learned. There is time for that. Time for each other.
And that's what's important.