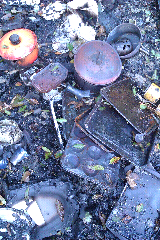 This post has been a long time coming. Its been trying to. I've been trying. Its been twisting and thrashing like a tormented snake that's been cut in two pieces and is bleeding in fragments on the garden path. Do snakes even bleed? Anyway, its this post that's been thrashing, desperate to be published....Me, I've been deep in a strange, lethargic torpor, which has precluded any creativity, save a rather rushed and lumpy doll named Jo for Leo's Christmas present.
Every evening I sit sullenly, thinking vaguely I should write something, every evening I do something else. Like go to bed, or wash up, or make hot chocolate, or read a magazine....or make a lumpy doll. There are so many things to do when you're feeling like you can't explain how you feel. 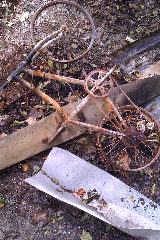 But  you know, the relief I feel to be even writing this far is huge, it's as if  a part of me that has been sleeping for three months is slowly stretching, yawning, stepping out of bed and trying out the world again, even with the tip of a toe.

Of course I have been in the world a bit, I even went Christmas shopping once, I cook, I took Tansy and Leo to a local home ed group, I feed the goats and chickens (did I mention we have goats and chickens?) There's a lot I haven't mentioned.

In fact I think I'd better say that again, just in case anyone didn't get it the first time, just to make sure I get it. 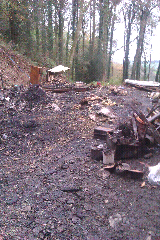 Our house burned down.

Not just a little bit down, or partly down, or in any way retrievable or salvagable down, but completely down.
It was built of wood you see, built by Hugh who worked every day for four months to make it.

It was a middle of the night waking to see flames licking round the woodburner sort of fire; it was a naked screaming grab the kids and run barefoot into the wood fire; it was a dash back in the dark to see if the phones and computer could be saved and no it was far too fucking hot fire; it was a drive down the track sobbing to escape the exploding gas bottle and leisure batteries fire......it was sitting in a fire engine wrapped in  blankets and realising I had my period and all my handmade pads had gone, it was drinking hot chocolate and eating porridge at our neighbours in borrowed clothes and shoes too big.....

It was that sort of fire.

The planners had spotted us you see. For anyone who isn't on intimate terms with the planning laws in England,  if you build an 'illegal structure,'  ie our home, to have any chance of getting planning permission you need to prove that you can not only earn significant amounts of money from the land, but you also have a 'functional need to be there overnight'. Now we did have our plans. Plans for goats, plans for cheese, plans for herb products, plans for a yurt based retreat for bereaved families. It's just that we hadn't reckoned on being fully operational quite yet, we wanted to finish building the house, let Fred have his own room at last, finish cladding the walls, that sort of thing. 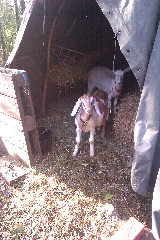 But the planners had other ideas, they spotted us, we got a letter, a visit was scheduled for two weeks hence. Two weeks to go crazy. Two weeks to not sleep for writing business plans and financial projections, two weeks to change our bedrooms into a barn to minimize the impact of our dwelling, two weeks to start a small holding, build shelters, sort fencing, buy goats, milk goats, drive the length of the county to bring back 20 rare breed day old chicks. Hmm, the chicks. Marsh daisies and Jersey giants. Very cute, rather smelly. Our very lovely planning advisor suggested using our newly acquired ex-bedroom barn space as a chick raising area. Do it the old fashioned way round the wood burner, a functional need to be on the property every night if ever there was one. Chicks need constant monitoring to ensure they don't get cold and die.Well they didn't get cold. Their pen got too close to the burner. We were lucky to escape with our lives. 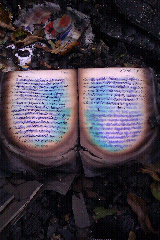 We find things. Tarnished silver spoons; distorted reindeer cookie cutters; Leo's patched trousers, hanging inexplicably on a briar nearby; fragments of a blue and white plate which was my ninth birthday present; sodden charred lumps of books, beguiling half phrases leaping out of the ashes to twist our hearts in two; 'Little House in the Big Woods'..'all was cosy in the little log cabin as the snow blew around.....' ....'and Noah and all the animals wept salt tears because the unicorns were gone for ever...'

I think the unicorns did leave that night, I certainly haven't seen a whisker since. And there are no owls in town either, floating feather light in their ghost cloaks, no foxes screaming down the moonfilled valley, only street lights and garden gates and next door's illuminated santa.

I really miss our home.