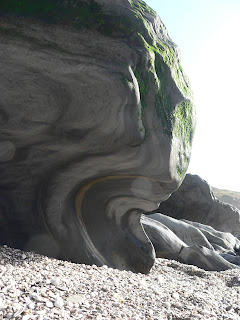 Last weekend, something wasn't right. I woke up on Saturday with my day planned out. Admittedly it wasn't particularly thrilling....getting a mammoth laundry into buckets, catching up on craft projects, mending, a walk, some firewood... But I was happy to have a quiet day at home and felt content.


At breakfast, Hugh bounced in,
'let's take the canoe out to sea and catch some mackerel' he cried
Tansy and Leo dropped their porridge spoons with a clatter and started cheering and something in me contracted. I reasoned that it was my day's plans being disrupted, however dull!
Sandwiches were busily prepared and our canoe strapped to the roof of the car. I plodded on with my laundry, conscious of dragging everyone's mood down. Adult bickering commenced.

The car wouldn't start. After a lengthy effort with jump leads and a neighbour's car we were off, my mood becoming blacker and more morose the nearer we got to the sea.

'Can't we just canoe down the river as normal?' I may have said, a few times.

We parked up to unload the canoe with the intention of moving the car to a pleasant spot that doesn't cost £8 to be there.
We unloaded the canoe. The car wouldn't start. No money for parking. My back was having one its low days and I wasn't relishing carrying a big canadian canoe several hundred  metres to the sea. In a rather untimely way, I started to fret about suncream, which we had forgotten, on one of the two days this summer when it's actually been sunny enough to need it. I started to fret about carrying the canoe with a bad back, and about having to call the car rescue service at the end of a long day in order to get home.  I mentioned canoeing in the river again, until it was pointed out that as the car wouldn't start and we were at the sea, this wasn't an option.
Adult bickering continued, with renewed intensity.

I ran off to the cash point to get parking money and calm down. I was feeling really really anxious. I considered going off on some adventure of my own after visiting the cash point.  I felt unhappy and obstructive and I knew everyone was getting frustrated with me.

While I was waiting in the shop to buy a newspaper to get change for the parking, I idly glanced down at the headline on the local paper which sat on the counter.

'Record number of rescues by lifeguards this year off the coast of Devon......parents are being warned....the sea is a dangerous place....etc'
Boom! Of course. That was why I was feeling so anxious it was like I had a ball of wire in my stomach. I was afraid another of my children was going to die.

There's something about the sea, perhaps because I was raised by land loving, sea fearing folks, that scares the hell out of me. Its majestic, beautiful, inspiring, breathtaking, but my childhood was punctuated by drowning dreams and I've never been someone who would pull on a wetsuit and go tearing head first into an enormous wave. Unlike my seriously water obsessed-grew-up-a-minute-from-the-beach partner.

I will happily swim about in a very calm sea on a warm day, and I love collecting shells and I don't mind going on a ferry, but a little canoe, out to sea, with my children?

Visions of them being thrown from the boat and tossed about in dark stormy waves filled my eyes with tears and my heart with terror.
You see I have seen Death. Head to head with the terrible awesome finality with which it strikes. The speed, the shock, the suddeness, just another sunny day with the kids. Pottering about, eating pancakes, thinking vaguely about what to do next, washing up, then I'm in an air ambulance with my daughter in a coma, then I'm in a hospital ward with a dead daughter.

And I can't be the relaxed chilled mum any more who thinks everything will be fine and things like that don't happen to us only to other people and usually only in the newspaper or at least in another town.
Because they happen to anyone, any time without a moments warning.

But we're still here. We survived. But we are changed.
If some one is later than they said they'd be and hasn't let me know they're ok, I'm not very relaxed.
Walking on a street or a pier or a river bank with small, impulsive, quick children is hard for me and my shoulders drop when we are away from traffic, deep water, danger.

Back at the carpark, I tried, not very eloquently to say that I was anxious, but I was shown the flat, calm expanse of water ahead of me and promised a calm, quiet, windless weather outlook for the afternoon.

It was, in the end a lovely day, of which I took many photographs which unfortunately are on a memory card somewhere around Brixham harbour, being nibbled by fish. My muscles gradually smoothed themselves out, we picnicked on a beach with egrets and oyster catchers nearby, Tansy and Leo caught seven silver mackerel, and I swam in a beautifully cool refreshing and calm sea. It  wasn't dangerous, it was really really lovely and I've got to just keep doing stuff even though I'm terrified.
Because I'm alive and I've got to live. And so have my kids

The alchemy of food

Some days I'm just plain bored of cooking! Do you feel like that sometimes? I love cooking and place (rather too much) importance on the regular production of delicious nutritious meals....but...sometimes I just can't be bothered.

I'll be just getting my teeth into chopping a huge mound of ash logs up for the winter and ... it's that time of the day again. Or I walk into the house at the end of a long day out with cranky hungry children and not a clue what to rustle up, or we've all just snuggled up on the sofa with some knitting and stories (it's that kind of summer in Devon) and ....well exactly. Sometimes I wish we could all just not eat for a day or two, just so I don't have to think what to cook.

But then sometimes I build up to an enormous crescendo of baking, churning out bread pies, biscuits, quiches....just to make it worth turning the oven on. When I was a kid one of the greatest sins was putting only one thing at a time in the oven...I don't think I have  really ever grown out of it, and of course it does make perfect financial and environmental sense!! And about three quarters of the way through the enormous crescendo, where everyone has decided to get fully involved, dinner is still a long way off and my tiny kitchen counter is a jumble of dirty dishes, chopped vegetables coated in flour, and four unfinished baking projects, I realise I'm not having fun anymore. I'm flustered agitated, snappy and  flushed and I just want to throw everything in the compost bin and run into the woods. The words, 'I just need to get this finished now and would you please go and play?' have been uttered, sometimes not so nicely, and with little effect.

And neither was yesterday's dinner, a pale unimaginative pasta that felt like wading ankle deep through mud, with some over steamed cauliflower and tofu. That was sort of how I was feeling when I was cooking it and it showed!

So I was surprised today to be making pasties, having torn myself away from the ash logs and the sofa, and quite enjoying it. It was late, Tansy and Leo were fighting over cleaning the rat cage out, and coming in periodically to drop rat cleaning rags into the sink near where I was working. I was tired and a bit grumpy. Conditions were not favourable. And I was uninspired by the thought of little cubes of carrot and potato going into my pasties yet again. Things were teetering on the edge of spiralling downhill rapidly when I found an enormous bunch of chard in my veg box and started chopping it and singing all twelve verses of Green grow the rushes oh! You don't know that song? Tansy and Leo were involved immediately and all rat issues were forgiven and forgotten. But tell me just who were the Rivals and the Lily white boys? Or the Proud Walkers for that matter?

So the chard went in with some sauteed onions and some chopped celery....Hmm chard and goat cheese would be a better bet, a hint of nutmeg? A zest of orange? Some raisins and toasted hazelnut? Buttery short crust pastry. Suddenly I felt like I was creating a bit of magic. I was enjoying myself, I twirled Tansy round the kitchen...(mainly to distract her from her current wobbly tooth which was quite literally dangling by a thread and spitting blood everywhere) the spices and fruits married in the pan in a fragrant mellow nuttiness, the dough baked to buttery perfection, melting goats cheese..mmmm!

That's how to prepare food!
You know it's strange, everyone ate much more calmly tonight, everyone went to sleep quietly.

Have you ever seen the film Like Water for Chocolate? It was always one of my favourites, although I haven't seen it for years. I have always longed to cook quail in rose petal sauce with as much love as Tita did.