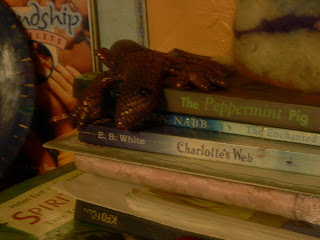 I have spent large parts of this holiday has been packing, sorting, reducing, rationalizing stuff. Boxes of things have been put aside for when we move onto the land in January, boxes have been put on another side to be taken for immediate use in the new house later this week. Slowly, slowly our shelves are emptying. But one shelf is still the same. In fact it hasn't really changed in essence since June 2009. It's Lily's shelf.
When Lily was alive she shared a bedroom with Tansy, and as the older sister appropriated most of the available storage space. As we live in a mobile home right now, this amounted to three of the four shelves in their room and a 'dressing table' area where she had a season table.  Big sections of the shared wardrobe space were filled with her clothes, while Tansy happily squeezed into the remaining areas. 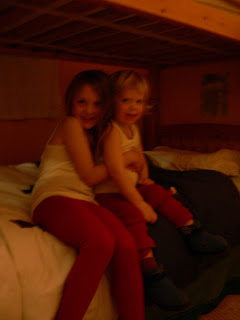 After the accident, everything stayed the same, clothes in the wardrobe, season table, books, dolls, jewellry boxes, all in the same place. Except the top bunk was empty. Tansy continued to use one shelf for her belongings and squeeze her clothes into limited areas of wardrobe space. After a few months, I condensed Lily's clothes onto one shelf,  painfully removing a few which weren't her favourites, passing some over to her dad in North Devon.
Then we made a little dolls house for Tansy's birthday, where could it go? Slowly.. item by item I moved the season table, her little purple lizard, the vase of flowers, the coloured cloths, and Tansy's dolls settled in.
And so it has gone, over the last two years and four months, bit by bit, all physical evidence of Lily's presence in that room has been erased.
The clothes had to go when Leo moved in, a year after her accident. I hated not to see them in the wardrobe so I could pretend just for a briefest moment that she was still here. Even though Icouldn't even bury my nose in them to capture some tangible wisp of a Lily scent as they had started to turn musty.
I hated that her precious top shelf near her bunk was cleared of her horses and notebooks and crochet work, to make way for Tansy to move up. I couldn't stand next to her bed any more and pretend that she was still there needing a knee massage for her growing pains, or wanting me to look through the pictures of her drawing book with her.

But there's still one shelf left, Lily's shelf. The contents has ebbed and flowed slightly as other children borrow items and then put others back. but in essence it is hers.
Her music box, her marbling kit, some books, her puppets which I made for her last Christmas present, her magnets, a painted plate..... Most of her personal things are now in a carved wooden chest in the sitting room but I could never bear to empty her bedroom shelf. Proof that she was once there, lived and laughed and cried and played there. Was grumpy and wouldn't go to sleep, was loving and cuddled with Tansy and Leo in bed, was upset when I was cross with her.

The problem is, that I now have to empty the shelf, as in two or three days we will no longer live here, and her bedroom will no longer exist. In any new house, or dwelling that we live in from now on there will never be a place that Lily has inhabited, there will be no memories of her making beads at the table or looking at her flower fairy books in bed or eating her dinner with Leo perched on her lap. 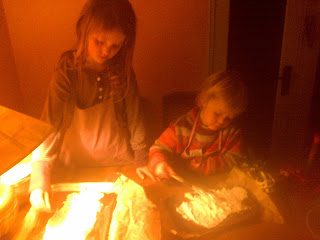 For the rest of my life I will live in a place that Lily has not been in.
And even as I write these words I know they are not true, not really. Lily will always be here with us, wherever we are. Not the physical little seven year old girl who hated cooked raisins and mushrooms,  but loved hawthorn leaves in spring, not her, but the intangible, undefinable, sparkling presence of Lily  who makes herself known to us in so many ways, so often. Who still wants to be with us and still loves us, wherever we are.
A bedroom is just a bedroom, a shelf is just a shelf, her spirit is stronger and more enduring than that, and so are we.
Posted by henrietta at 16:06

Welcome to the comments... I would love to hear from you too!